Why Does Bitcoin Have Value?

Our Writers Discuss Why Bitcoin has Value
By
Coin Cloud Team
, published on
February 1, 2019 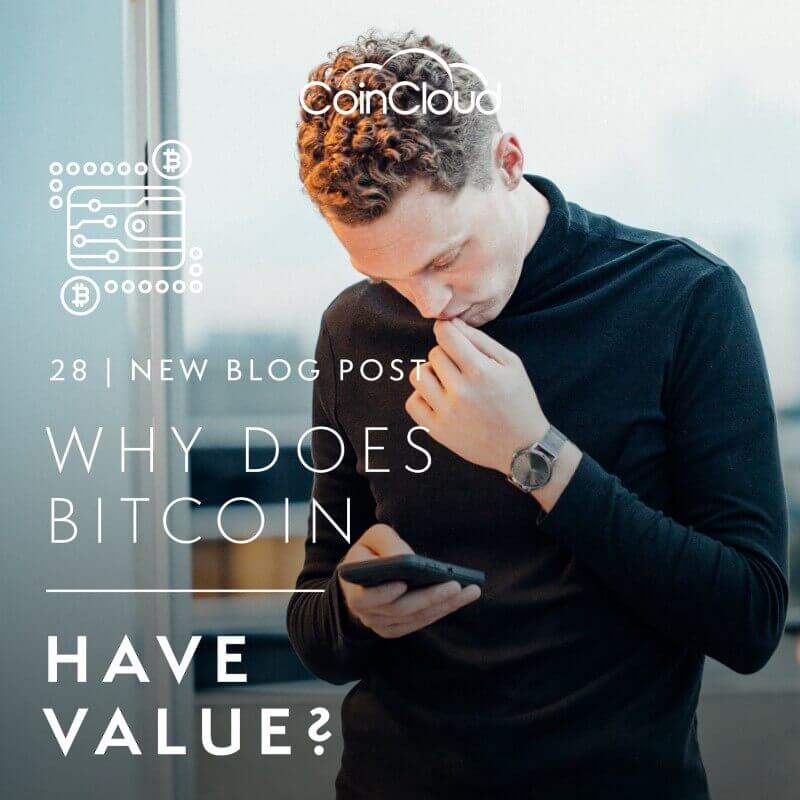 Most of us have a pretty good idea of how to value a product based on its intrinsic value. For example, gold is valuable because it can be used for many different things (i.e. jewelry, coins, toilets if you’re really rich, etc). On the contrary, an empty water bottle isn’t all that valuable. Why? Well, aside from carrying loose change, that empty water bottle really can’t do much for you.

When we try to apply this same logic to Bitcoin, things get a little murky because, let’s be real, there really is no intrinsic value to Bitcoin. If people don’t use it, then what is it really good for? In this blog post, Coin Cloud discusses why Bitcoin has value.

Let’s Start at the Beginning

Now, this is where fiat currencies came in to save the day. By establishing one intermediary commodity that all parties could agree on, that value exchange simplified.

So Why Does Bitcoin Have Value?

When using a traditional economic mindset to understand bitcoin’s value, a lot of it may not make too much sense. Bitcoin is a currency, yet it’s not backed by a government. But, if we take a look at it, why does fiat currency have any value? In its original days, the dollar was backed by gold, but that measurement of value has since aged. Today, the dollar in our wallets really only holds value because we say it does. If all of a sudden one day people determined that water bottles would be the new currency to be used in trade, the dollar would lose all of its value. At the end of the day, the dollar is just a piece of paper.

Bitcoin is no different; it’s just a modern, smoother, more efficient approach to what the dollar already does. If you ask an economist what derives bitcoin’s value, he or she would probably tell you it is its network effect. "Network effect" is just a fancy way of saying it’s valuable because people use it. As more and more people use it, its value will continue to increase.

One thing unique to Bitcoin is that there is a set amount of bitcoin that can be mined (21 million). This gives bitcoin its scarcity value, meaning the less that is available, the more valuable it becomes. When Bitcoin first came to the scene, there were plenty of bitcoin available, meaning owning a single bitcoin really didn’t mean all that much. As more bitcoin were mined and more people started purchasing it, Bitcoin’s value skyrocketed. To put this into perspective, bitcoin traded at $1.00 in 2010; 7 years later towards the end of 2017, a single bitcoin cost nearly $20,000. Why? Simply because more people were using it.

The real value behind Bitcoin lies within its benefits. If Bitcoin posed no benefits over fiat currencies, it would never catch on in the general public, meaning its value would never increase. Instead of trying to find the intrinsic value in Bitcoin, we should be looking at why Bitcoin is beneficial and how it can affect our global economy in the coming years.

Firstly, Bitcoin allows users to engage in financial transactions without having to deal with a third party (ie banks, credit unions, etc). This democratizes the economic playing field and affords opportunities to those who simply can’t compete with the traditional financial system. In addition, Bitcoin allows users to trade across international borders efficiently without having to endure the strenuous transaction speeds and fees that traditional banking systems impose. Granted, these are just a few of the benefits that Bitcoin affords its users; there are plenty more that exist outside of this. But nonetheless, it is these benefits that give Bitcoin its value.