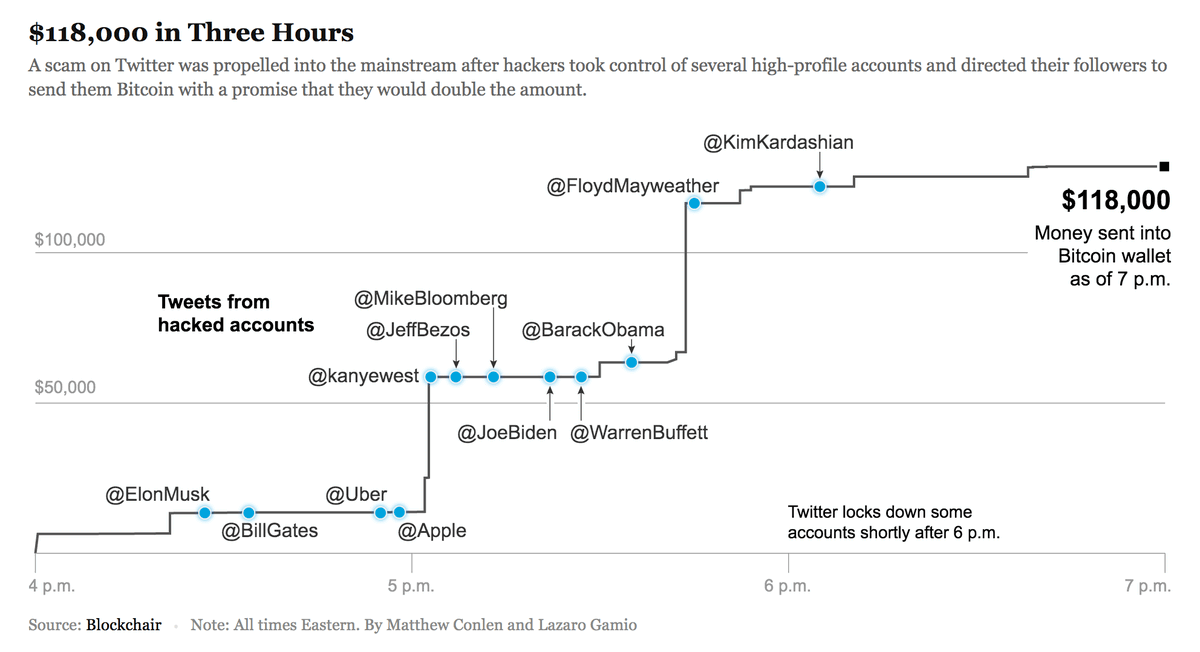 Two days ago, the Twitterverse fell victim to a massive Bitcoin scam

… one that could have been way worse than it was!

Does this mean Bitcoin is unsafe, or only associated with scams?

The short answer is no.

The longer answer is … heck, no!

Interestingly enough, Bitcoin isn’t even being questioned much. It’s as if everyone knows that this was a Twitter breach, not a Bitcoin scam.

But still … the hackers chose Bitcoin for a reason. Just like lots of scammers choose to ask for Bitcoin rather than any other form of currency. There are a few reasons for this.

1. Bitcoin is “pseudoanonymous”: There’s a level of privacy to trading Bitcoin, even though every transaction is permanently recorded on the blockchain. So, scammers feel they can hide better if they ask for the cryptocurrency rather than, say, a Venmo payment. 2. Bitcoin is fast: While sending a wire transfer takes days, bitcoin can be sent almost instantly. Well… that is, IF the sender already has an account with an online exchange, or IF they use a Bitcoin ATM to send the funds. Otherwise it, too, can take days. 3. Bitcoin is well-known: The hackers left messages on the blockchain indicating that they could have chosen the more untraceable Monero cryptocurrency – but it’s not as easy to get as bitcoin, and most people have never heard of it, so they went with the #1.

Let’s look a little bit deeper at what happened, and how it turned out.

How the Scam Went Down

According to a timeline crafted by search engine Blockchair, the scam started around 4pm EDT and ended at 7pm. During that three hours, $118,000 was scammed from people who saw bogus tweets sent out by hackers who gained access to prominent Twitter accounts, including Apple, Uber, Elon Musk, Bill Gates, Warren Buffet, Jeff Bezos, Barack Obama, Joe Biden, Kanye West and Kim Kardashian.

The first tweet came from online cryptocurrency exchange Binance, and all the others said basically the same thing: “I’m giving back to the community. All Bitcoin sent to the address below will be sent back doubled. If you send $1,000, I will send back 2,000. Only doing this for 30 minutes. Enjoy!”

Another of the commandeered accounts was that of cryptocurrency educator Andreas Antonopoulos (@aantonop). Antonopoulos posted a video to his YouTube followers stating, “A couple of hours ago my Twitter account, @aantonop was compromised as part of a widespread attack that appears to have been an inside attack, which allowed them to bypass two-factor authentication. It also appears they’ve changed my password, locked out my account and changed the email associated with the account, which ironically means that Twitter support won’t answer any of my support requests because they don’t see the associated email.”

Antonopoulos finishes up by saying, “Do not fall for these scams. Stay safe, be careful, and don’t trust – verify.”

As crazy as that may sound – this is the first time such a scam has operated from inside Twitter, rather than as a result of fake accounts – Twitter later confirmed it as true. The official @TwitterSupport account tweeted, “We detected what we believe to be a coordinated social engineering attack by people who successfully targeted some of our employees with access to internal systems and tools.”

They locked down the compromised attacks and deleted all the fraudulent tweets. “Based on what we know right now, we believe approximately 130 accounts were targeted by the attackers in some way as part of the incident. For a small subset of these accounts, the attackers were able to gain control of the accounts and then send Tweets from those accounts,” Twitter Support tweeted last night.

They also mentioned working around the clock to rectify the situation, including restoring access to the rightful owners and investigating what else might have been compromised.

With such a wide reach – we’re talking millions of subscribers who potentially saw the scam tweets – it’s hard to imagine that only about 400 people lost money, and the total haul was just over 13 bitcoins, or around $120,000. I mean, just over two months ago, 12.5 BTC was still the reward for mining a single block on the blockchain, so in the grand scheme of things it’s not that much (plus there’s no guarantee that some of that money didn’t come from the scammers themselves, to pad their results).

Why Didn’t it Work Better?

Presumably a lot of time and effort was put into pulling this fraud off … so why didn’t it have a bigger return?

It may point to the fact that people are getting more savvy about scams. It could indicate that people don’t trust social media. Or it could mean that people didn’t know how – or didn’t have an account – to send bitcoin to the posted wallet address.

What About Bitcoin ATMs?

So, what does all this mean to people who use Bitcoin ATMs to send money to people? After all, BTMs are the fastest and easiest way to send cryptocurrency to someone, including a scammer.

Well, we have some good news. If someone uses a Coin Cloud Bitcoin ATM to send funds to a scammer, chances are they’ll be stopped. And according to records, nobody tried sending money to the Twitter hackers using Coin Cloud machines.

Suspicious activity always triggers a flag on the Coin Cloud system, which prompts the transaction to be marked for review rather than going through. The live support staff will then investigate to find out the circumstances, including how many transactions the sender has done before, their level of verification, whether he or she knows the receiver, and so forth.

So, you can rest assured that Coin Cloud BTMs are among the safest ways to buy, sell, trade or send Bitcoin, and other digital currencies. In fact, we have another article in the works that dives deeper into how Coin Cloud keeps you safe. Stay tuned for more!