Simple and Thorough Explanations of Cryptocurrency Transactions
By
Coin Cloud Team
, published on
May 14, 2020 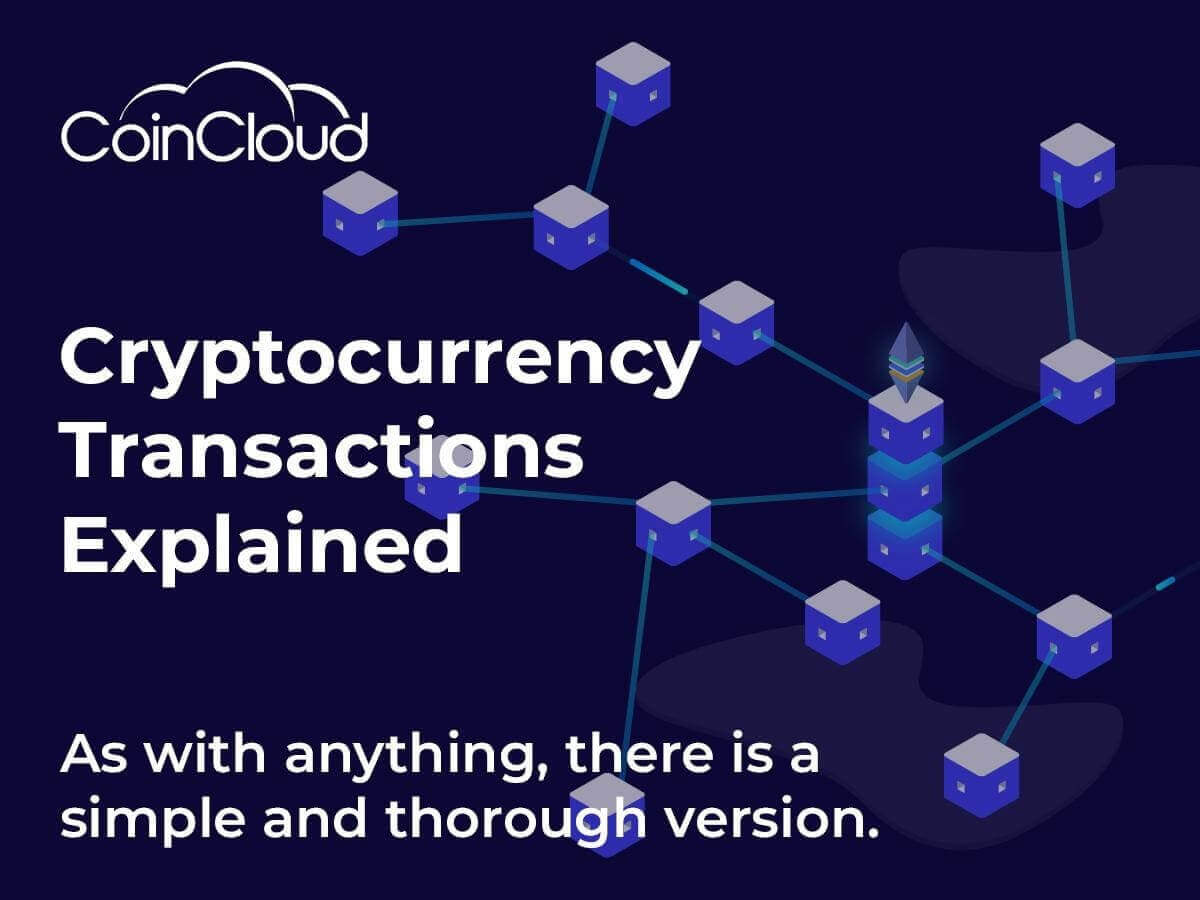 Similar to nearly every other cryptocurrency in the market, Bitcoin relies on a universal ledger system called the “blockchain” to facilitate transactions. Every transaction executed creates a set of data, which is stored on the blockchain as part of a “block” of code. This block not only contains the information for your transaction, but also for the block that comes before yours and the block that comes after yours.

So, each block links together to form a chain of validated, verifiable information within which no single block can be tampered with or changed without, effectively, altering the entire chain – which is currently deemed as impossible. It is this infrastructure that serves as blockchain’s primary claim to fame.

Here’s a deeper look at the steps involved in a Bitcoin transaction, as well as some of its more abstract elements.

Let’s sketch up a picture of how every transaction on the blockchain is executed (for example, from your digital wallet to someone else’s). 1. You open up your digital wallet, plug in an amount of Bitcoin, and input the receiving party’s public key (that long combination of letters, numbers, and characters); transaction initiated. 2. The blockchain verifies your public key so it can store the transaction information on the blockchain. 3. The blockchain network takes your public key and verifies that you do, in fact, own the amount of cryptocurrency you’re trying to send. 4. The network checks itself to determine if it has previously promised this attempted transaction to someone else. After the details are verified, the blockchain network then stores the transaction information. 5. Within a couple of hours, the recipient will see the new balance on his account, and the balance will be deducted from your account; transaction completed.

The Intricacies of the Network

From a bird's eye view, the transaction is a simple, and hopefully logical, process. But, as Apple, Inc.’s iconic co-founder, Steve Jobs, said, “Simplicity is the ultimate sophistication.” Blockchain is no exception. An impressive amount of calculations is handled below the surface so that blockchain’s “simplicity” can shine.

This is where we introduce public and private keys. Investigating this system lets us understand the blockchain network’s verification process, as well as its security features.

Once the user attempts a transaction, the network references the user account’s private key to create a public key that is both linked to the account AND shared with the entire network; there’s lots of “key” information in there, so read that one again if you need to!

When the system attempts to verify the transaction, the user’s public key verifies its alignment with the user account. After that’s completed, you can go on with the transaction. The system uses the receiving party’s public key to transfer the coins to their user account. This action creates a completely transparent and verifiable system that allows each unique public and private key to link to verified accounts, which possess historical data on every past transaction. It’s all made visible on the system – while still being almost completely anonymous. No personal details are attached to the transaction information besides the public key of each account.

The second intricacy of the system deals with something called a “hash key.” A hash function is basically a technical process that compresses any amount of original information or data into a unique string of 64 characters. Hash files can be created for the same data, multiple times, and the string will remain the same. The only time this hash file would change is if the user changes the original data.

So, whenever a block is created on the blockchain, it also contains a “hash key” of the data encoded in the block.

1. Every block is traceable on the system 2. Any alteration will result in a change of the hash key

This means that if one hash key changes, the entire chain also needs to change along with it. Remember, each block contains information about the blocks before and after it in the chain. So the possibility of manipulating or tampering with data contained in any block is effectively eliminated.

Nearly every cryptocurrency – and several non-financial digital assets – in existence utilizes the blockchain. We are still at the beginning of this phenomenon’s impact on the world, but the network’s use cases span far wider than just finance, and some consider it to be as significant to technological history as the Internet. Our intention here was to explain this system as simply as possible. The same logic we shared in this article applies across all crypto assets. Do you see any flaws in blockchain’s structure? It’s pretty rock solid, from our perspective, but we’d love to know what you think!